Let me start this story like all stories ought to start with. Once upon a time, long years ago there lived a king. Now, he lived in an amazing palace (like all kings do) with his three beautiful daughters. The king loved his daughters dearly and gave them all the love and all the riches of the world. While the daughters grew old enough and marriageable in age, he knew he didn’t have much time. Like all senior folks, he thought of writing down the will. And to decide that he called them all for a small chat and asked them a tricky question. “Dear blessed daughters of mine, which of you hath carry the most love for me? That shall be bequeathed the most of my wealth.” The very next day was the good old fellow’s birthday. The daughters brought some presents and greeted their father with love. Now, in my mind’s eye what I see is an old lean man in a white mundu pacing up and down, with hands tied behind, deep frown on the forehead and anticipation in the eyes. But if your father is a white old guy with a nice pot belly, long white hair and beard donning a purple robe and a crown then things can get really creative for you.

“Cometh my daughters”, he opened his arms wide. The eldest one, Liverine presented him with a bag full of rubies and diamonds and said, “Father, beyond the value of rich and rare, no less than the most precious stones the world has ever seen, there lies my measure of love for you”. The father guy was very pleased with the answer and looked at Mangnoria. She stepped forward with her gift which was tinkling in a bag, “Father dearest, prize my love above all the land’s finest gold and silver”. Still pleased he looked at Cheneril, the youngest dear, who pushed a bag in front of him and said, “I cannot bring the moon to you, my love for you is as meat loves salt.” And offered her bag full of salt. Like all stories you know what is going to happen next. The young one is abandoned and sent to the forest, just about then a young prince is taking a stroll in the forest. With his eyes popping and mouth salivating he approaches the princess. No…no our prince is far more dignified, he falls in love with her and decides to spend the rest of the life with her. In their marriage a great feast is arranged and all prominent kings and queens are invited and so is our Santa father in purple robe.

The feast began with delectable cuisines served in copious amounts. As they put the first morsel in the mouth they spat the food. None could eat it. The royal chef was summoned to ask what went wrong. He said as you senior folks have high BP I deleted the salt from the receipe….ah!! No…no..no..he is in the story too so he is also dignified. “The virtuous young bride’s wish is my command, the food served hath no grain of salt”. That is how our Santa father realised what he had done. Now you know what is going to happen, all tears and hugs and then happily ever after. It took me about 500 words to come to the point and the point I really wanted to make is what salt or namak means to us and to our survival.

I found about 10 different stories or folktales that tells this same story from England (King Lear), Germany, Italy, France, Pakistan, India, Austria and few more places. Not just these but there are phrases that we use in hindi, namak halal (means loyal) namak haram (disloyal) or even dialogues from bollywood like “Sarkar, meine aapka namak khaya he” (meaning I have always been loyal to you). References to salt and its use has always been around for a hundreds of years.

I was not hoping to have such great revelations when we all from the learning centre visited the nearby salt pans in Wadala, Mumbai. This place can’t be found on google maps if you write salt pans, that maybe because there are talks that the government is trying to get rid of it. This site is abutting the Bombay Port Trust road and is roughly located within the mangroves between Wadala and Mahul suburbs. The area is less than half a km2.

So we went with our team.

It was mid december last year and the sun was still bothering. We parked closeby and walked to the pans. The kids were happy to be out and didn’t care where we took them. At the gate we were greeted by a small mound of salt carefully packed in plastic. Looking at these one of the kids, “What is this? Salt mountain?” They always think we take them to the weirdest places. We tread forward past the Mithi river (nothing mithi about it) which is rather an industrial/sewage nallah.

Besides it lie the expanse of the salt pans which looks like geometrically cut cardboard pieces lying on the ground. These are the barren now. It doesn’t feel like you are in Mumbai one of the crowdest places in the world.

As we enter the space a rhythmic thumping greets us. It feels like music. These are salt pan workers and they are preparing the ground. It is slushy, silty and black. They work everyday from early morning around sun rise till mid morning. They stop before the sun is on the head. These workers live and work near the pans. They work all year round except for the rains when they go to their villages to till in their farmlands. 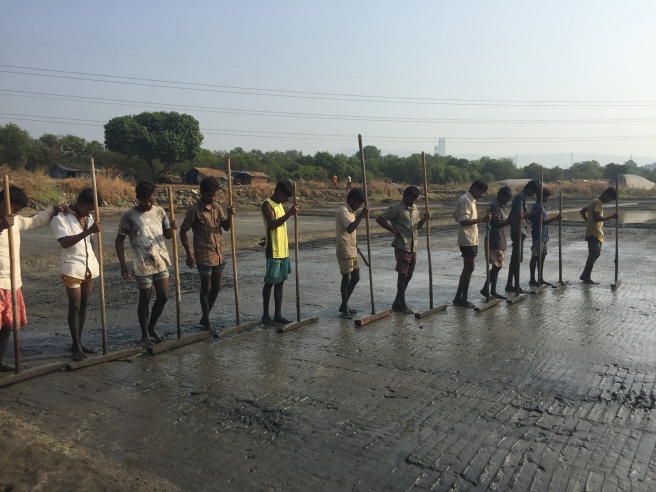 Their faces look hard and their bodies tough, they maybe even younger than me. I am wondering where their families are. Some of them look shy, they talk among themselves looking at us. Not all oblige our barrage of questions. One of them kind enough thinks to put us out of misery and entertains our curiosity. Their language seems a little different, maybe it is a dialect, a mix of Gujarati and Marathi.

We are told that this preparation of the land goes on till the surface becomes tough enough to hold water. At the corners of the pan it does feel hard like concrete, its towards the centre that needs work. They carry a huge wooden rammer and slowly inch by inch cover the entire pan. They all work as a team and everyone needs to finish working on atleast 5 pans everyday. I am told this will continue till sankranti which marks the end of the winter solstice. Between these pans there is a channel through which water is pumped inside the pans. I was wondering if all this is the water from the Mithi river which flows only feets away, when Ram Kumar kaka mentioned since its quite polluted they use water drawn from the borewell. “I am sure water from Mithi percolates and contaminates all ground sources”, I argue. But he says they have been doing this for a while and it has been all well. So….off we go to return after a month.

When we arrive next time, we find a warm reception and change in the landscape. Things look more white now. The water is collected in the pans and left to evaporate. You can see a thin film of white forming underneath. 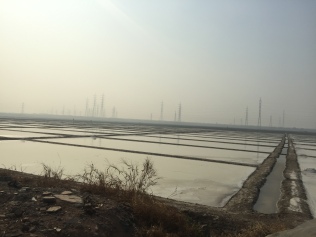 The first instances of salt formation. This is not ready yet, we are told. “There’s still work to be done. The salt is mixed with the silt and has not crystallined yet”, says Ram Kumar. There’s still waiting. I ask him doesn’t the high saline water bother his hands and legs, to which he smiles shyly and says, “yes it does but what can be done about it, it’s got to be done this way”. He uses a different instrument this time. It has trowel like wooden plate at the end of his pole. I guess it is to make the surface of the pan even so that water will be collected evenly. He also uses a claw like thing to remove and shake up the thin sheets of salt so that they don’t become big slabs but remain granular. All the loosely formed first version of salts will be removed and thrown in the nearby pans. This is done till noon time and then water through bore well is filled in. 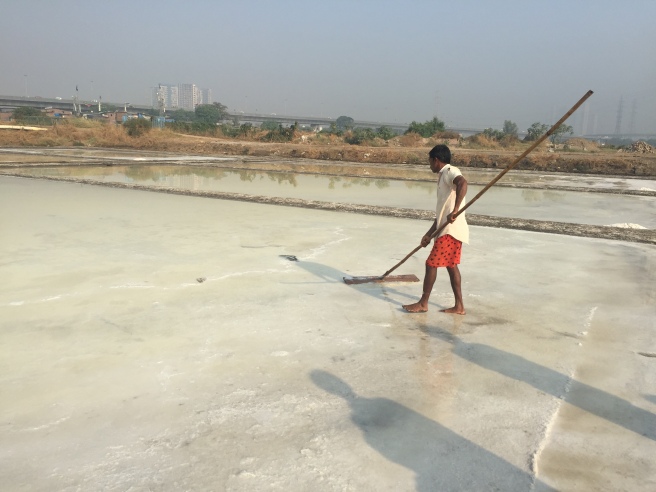 We bid adieu to Ram Kumar again and return exactly after a month.

When we returned the first sight was amazing. The little cardboard pieces looked whitewashed now. The kids were really excited this time. Some of them yelled, “Epic, this is epic!”. It was all ready to be scooped out. The workers are running between the channels, carrying on their heads huge tubs filled with salt. There’s a truck waiting and salt is filled in the sacks weighed and loaded. I felt like, is that all? Isn’t there more processing and tagging etc.?

So, this is the end of this story. Leaving you with some pictures, hope they convey some amount of awe that we have felt being there. 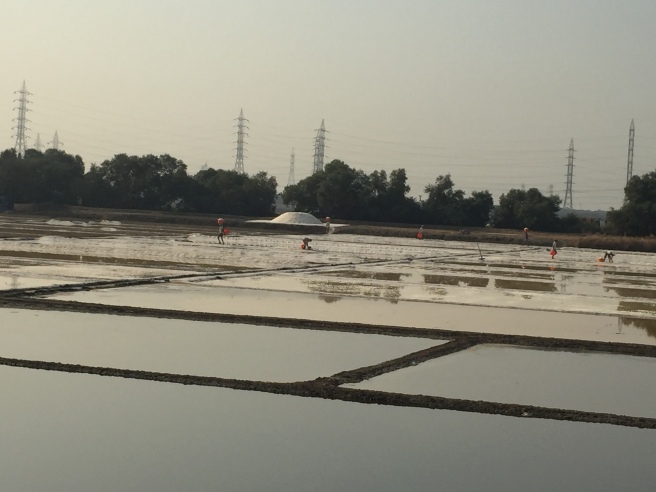 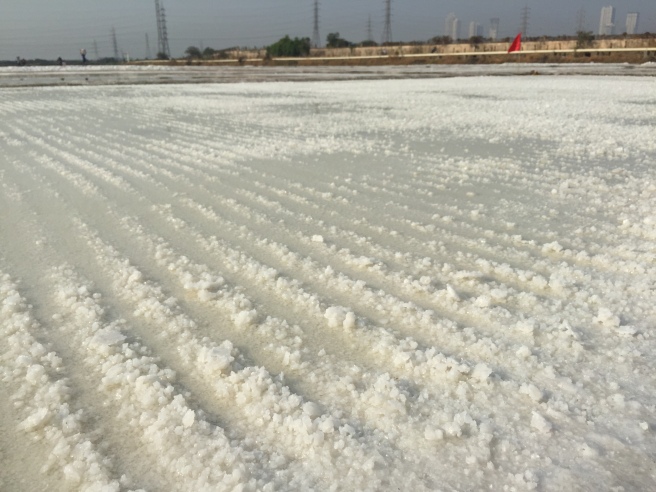 One thought on “Small but indispensable”